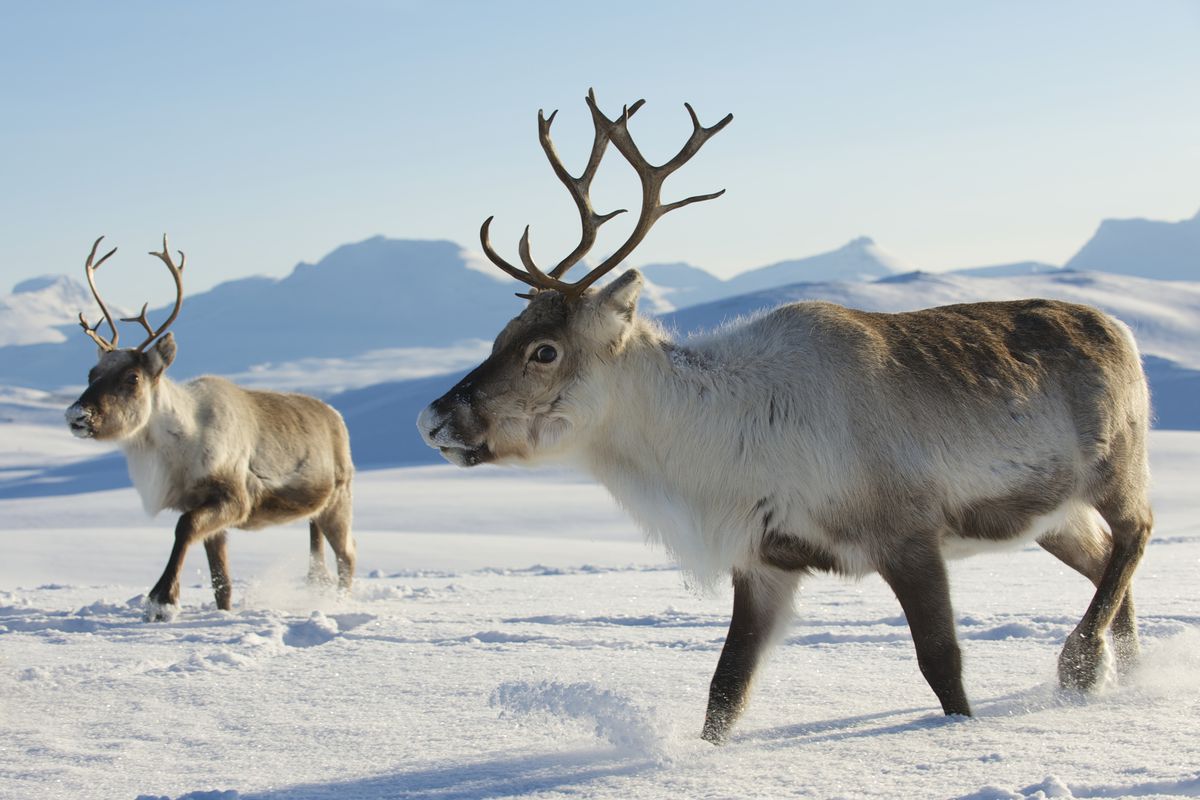 Reindeer (Rangifer Tarandus) are a species of deer and the only cervid species in which both sexes grow antlers. Although they are not native to Iceland, there are thousands found in Eastern Iceland. There are various subspecies inhabiting the south that are generally larger than their counterparts. They have shoulder heights of up to 120 cm and total length ranges from 150 to 230 cm. They have short tails and are marked by sexual dimorphism- males being larger than females. They vary in color from very dark browns to white.

Reindeers (also known as caribou) can be found widely in the northern hemisphere and are exceptionally well adapted to cold and snow throughout the winter. They can be found in Russia, North America, Canada, Alaska, Norway, Northern Sweden, Northern Finland, Svalbard and Iceland. They are only native to the Arctic, subarctic, tundra, boreal, and mountainous regions of northern Europe, Siberia, and North America. There are about 2,890,400 individuals globally. Although the population is only vulnerable, they are on a decreasing trend.

Reindeer are very social creatures, with herds in size from 10 to a few hundred reindeer. They stick to their herds when it comes to feeding, traveling and resting. Herds often travel south together in the winter, in search of food. Reindeers are some of the world’s greatest travellers, with treks up to 5,000 km a year! Young deer can outrun an Olympic sprinter at only one day old. In autumn is when mating season begins, during this time the herds usually become smaller.  Fun fact: reindeer have lost their circadian rhythm in order to adapt to their arctic environment.

Antlers: Antlers of reindeer are made of dead tissue and are regularly shed.

Eyes: Due to the long winters in the arctic, reindeers’ eyes are very sensitive to UV light.

Nose: By breathing through their nose, they warm up the surrounding air before exchanging in the lungs.

Coat:  They have two layers of hollow and insulating fur with a dense undercoat and a shaggy outer coat.

Feet: They Have large feet and two dew claws that allow them to distribute their body weight and dig for food under the snow.

Reindeer eat lichens in the winter, and they are the only large mammal who is able to metabolize lichen. They also eat leaves and grasses, however, they have a semi-cannibalistic side, and have been seen eating their own fallen antlers, most likely for the calcium. Although you think that reindeer are herbivores, they also feed on small rodents, fish, and bird eggs. They have also been seen enthusiastically enjoying some tasty mushrooms in the summertime. Reindeer feed together in herds, due to their social needs.

Poaching is a major threat in Europe. They are protected under the Bern Convention on the Conservation of European Wildlife and Natural Habitats. Although they are of least concern, the population needs to be monitored and protected to prevent any future declines.